You are here: Home / Blog / irrational 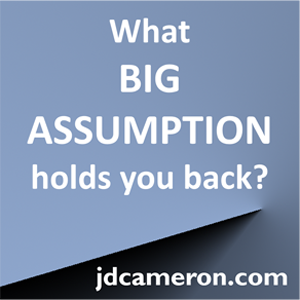 Resistance to change is a common challenge in the business world, and you can search the internet for useful advice on how to manage change successfully. But what should you do when you’ve honored all of the classic guidance on managing change and people still passively or even actively resist? Sometimes resistance appears irrational or is unexplained (even to those who struggle to engage and move forward). This article provides guidance on managing “irrational” resistance to change.

When change happens, resistance happens too. If you have been responsible for introducing change in your organization (e.g. new technology, business process, culture change), then you likely can tell many stories about organizational resistance. You’ve learned that resistance is to be expected, and planning for resistance is part of your change management process. You’ve also learned that despite your best effort, resistance still happens, and can be managed with earlier engagement and better communication. 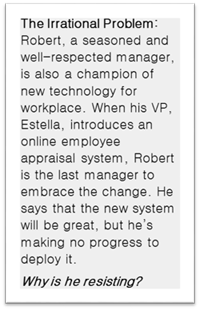 But at other times, resistance persists without explanation. Understanding what that is and why it happens is exactly why you should keep reading this blog article.

How do you respond to resistance? When you see, hear, or sense resistance, what goes through your mind, and what action do you take? Typically, most extraverted leaders move quickly towards defending the change, while introverted leaders defend their decision-making process for the change. However, the exceptional leader moves quickly into authentic, curious questions to understand the resistance, and then determines their response. Even more so, the exceptional leader appreciates some resistance, knowing that in the end, commitment and success are better.

Don’t let that last sentence slip past you too quickly. If you really want to test your authentic reaction to resistance, think for a moment about how you respond to your children when they misbehave. Do you view that poor behavior as defiance against you or your rules? Or do you view that resistance as their little hand raising up to say “I need your help in this area”?  When your child acts out, you’ve got a great idea of where you need to focus your effort in raising great kids. 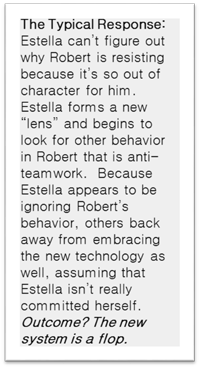 Can they logically explain their resistance? Let’s assume you have decided to investigate the resistance. If they can explain why they resist, follow these basic steps: Listen, Reflect, Plan, and Act. You may need to make adjustments to your change event because they raise a valid concern. You may need to communicate more, because they don’t have enough information. You may need to address emotions and innuendos stemming from FUD (fear, uncertainty, and doubt) that rumbles through the organization. If the resistance is real, your response should be visible, clear, and measurable.

What about irrational (unexplained) resistance? In our research and consulting work, we’ve explored the phenomenon of resistance that remains ambiguous or undefined. We call this “irrational resistance” because, on the surface, there appears to be no logical explanation for the resistance. Managers are then forced into reacting to symptoms rather than solving the real cause of resistance. Why would someone resist change yet be unable to (or reluctant to) explain their resistance? How do you move them forward, or at prevent them from moving others forward?

Here’s what we’ve learned.  Sandy Piderit (2000) explored ambivalence as a form of resistance. When employees don’t comply with the change, or move very slowly such that delivery and benefits are impacted, the resistance may well be ambivalence. Her research indicates that most employees fall in this large but somewhat silent category. We have witnessed behaviors like anonymous comments in the suggestion box, slow response to training requests, delayed migration to a new technology system, a lack of enthusiasm or commitment to the change event – all are common signs of ambivalence.

Kegan and Lahey (2001) reveal another form of what appears superficially to be irrational performance – competing commitments.  When a project manager who publically states support for a change yet drags their feet, they may unknowingly be struggling with a buried conflict in values. That star performer who excels at teamwork may unpredictably withdraw from team activities required to move a project forward. Competing commitments are often beliefs held since childhood about how the world should work, what values should be honored above all others and what fears that must be avoided at all cost. Simply put, a competing commitment is a subconscious hidden goal that conflicts with a person’s stated commitments.

How should you manage irrational resistance?

Kegan and Lahey suggests that the key is to undercover “the big assumption” – the personal worldview that interprets everything we see, leading occasionally to generating a competing commitment. They prefer a two or three hour one-on-one conversation that is probably best done by a psychologist. However, the also offer a four column paper exercise to guide a shorter conversation. In a nutshell, column one captures the statement about the genuinely held commitment. Column two identifies what is done that works against that commitment. Column three identifies the competing commitment that generates column two. And column four captures “the big assumption”.

I’ll offer a shorter version that may be more ‘organic’ as a part of your relationship building effort with others. Simply be authentic with the apparent resistor about what you routinely observe in their commitments (behavior) and then what you have recently observed that is different. Then share your own story of a competing commitment to explain the concept and to validate the importance of surfacing “the big assumption”. If your hunch is right, they will be able to identify their own competing commitment and their big assumption. If your hunch is wrong, chances are that you will still successfully label the resistance and know what you’re dealing with, making you one step closer to being an exceptional leader.

While we’re talking about it, what big assumption is holding you back? Please share your experience and lessons learned.