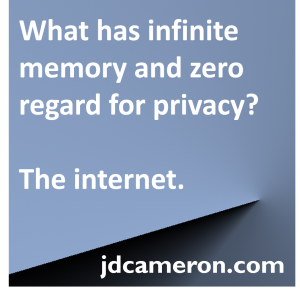 One picture is worth a thousand opinions. How do you walk that thin line between being yourself and being a professional? Sure, Facebook and Twitter ought to be reserved for personal fun, opinions, and reflections. But in today’s world, you have to manage several different versions of “self”, assuming that your career journey is in transition (or could be).

Perception is powerful (read What Mask Are You Wearing). That doesn’t mean that perception is accurate, but perception is indeed very powerful.  What your boss thinks of you is their ‘reality’ and that can make a big difference in who gets a raise or promotion. During your job interview, what the suit behind the desk thinks about you can stall your career before you even get started.  “The Company” can be your boss, your peers, your suppliers, or your customers. Regardless, their perception will be formed on the available data, and Facebook is fair game. Consider how these six principles can impact your career:

1.    “The company” believes you spend too much time on Facebook.

Do you post during the workday? If so, then your friends who believe that Facebook belongs at home will make their judgment. Even if you only use Facebook before or after work, if you make several comments or posts, people will begin to think that you are on Facebook ‘all the time’.

The Solution?  Ignore Facebook during the workday, and limit your comments on co-workers posts. If you think that’s ‘not fair’, then go ahead and comment, but know that unfair judgments are brewing…and cutting off your nose to spite your face is just plain dumb.

2.    “The company” doesn’t agree with your position on fill-in-the-blank issue.

People are interesting, and that’s a good thing, but you never really know what hot button you might hit when you post your opinion about topics (e.g. abortion, ObamaCare, gay marriage, or military action).

The solution? Keep your opinion about those touchy subjects off of social media, and try to refrain from getting into a debate with someone who posts something you don’t necessarily agree with.  There is a much better time and place to have those conversations. Perhaps it’s not fair, but think about the best outcome for everyone, as that says something about your character too.

“Business causal” means wearing nice clothes designed to make you appear trim, wearing the right amount of make-up to accentuate the positives and minimize the negatives, and sporting a hair style that’s under control.  Saturday’s picture of you working in your flower bed, or heading to the beach in your comfy clothes, or making pancakes just after rolling out of bed do not reflect you at your best. While “the company” looks just as unkempt in their off time as you do, they aren’t obligated to admit to that fact. Not fair, for sure, but it’s the reality of living in a fallen world.

The solution? Assume that pictures of you will be seen by everyone, and then decide if the thrill of several “likes” is worth the risk.

Your BFF will probably respect your Facebook page, but your BAF (barely-a-friend) will one day post some rude politically incorrect statement and tag you in it.  When that happens, your career may well be in the hands of an idiot that you can’t control. Even if you can delete the offensive post from your profile,  “the company” will see it in the nanoseconds that it existed. Lucky you.

The solution? Everyone gets one opportunity to mess with your profile, and then you remove them as a friend, because they really aren’t one (even if it’s your mama).

5.    “The company” judges your integrity, attitude, and competence.

If you haven’t gotten the message by now, then hear this: “The company” doesn’t mean to do you harm, but the company is made up of a lot of unique people with lots of personal issues and core values that you can easily offend.  Even if they misunderstand your post, when your boss or co-worker is involved, then it really doesn’t matter. What does matters is their perception of you.

The solution?  Check out our suggestions below.

If you’re using Facebook, then you too are likely to judge others based upon their Facebook self-branding. When your friend’s political views are at odds against your views, does that knowledge affect your relationship with them? If their lifestyle choices are different from yours, does that build a relational gap? Even worse, does that knowledge make you trust them less, consider them less capable, less moral, or drive you to avoid working with them?

The way we behave on social media is very similar to the way many people behave when they are driving their car.  People find comfort in anonymity, which makes them feel justified in taking a far stronger stance on a topic than they would ever do face to face.  Don’t be fooled.  Instead, take a few simple steps to protect your career from damage caused by social media.

1.      Everything on the Internet is public

2.      The Internet has near infinite memory

Then consider the following simple changes before you post:

Humans are limited in our ability to fully understand how others think and feel, and what drives their thoughts and actions. Hopefully we continue throughout our lifetime trying to be more self-aware, but fully understanding the complexities driving the behavior of others is a challenge. So we rely upon perceptions, and if you are wise, you learn how to be transparent in a way that more accurately reflects the true you.

Have a story about how social media caused you grief, or how you recovered from it? Share with us so that others can learn!

Who is The J D Cameron Group LLC?

Since 2004, we have helped clients worldwide to achieve breakthrough business performance by transforming individuals, teams, projects, cultures, and organizations.